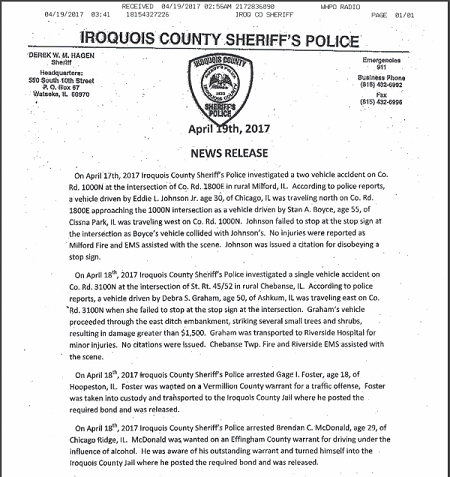 On Sunday, April 2, Iroquois County Sheriff's Police responded to a train vs. truck collision just south of Danforth, IL.  At approximately 10:00am a southbound Amtrack train collided with a privately owned delivery truck attempting to cross the railroad crossing on Co. Rd. 2000 N.  The driver and the passenger of the delivery truck were pronounced dead at the scene.  No occupents of the train were injured.

The victims were identified as Tony R Campbell, age 54 of Kankakee, IL and Alexander A Odzana, age 47 of Kankakee.  Gilman Fire units assisted at the scene along with IMH ambulance, Canadian National Railroad police, Amtrak Police, and the Iroquois County Coroner

The investigation is ongoing

Kathy Clark, 47 of Watseka was arrested in the 500 block of E. Walnut St. on Friday 3-31-17, for retail theft from two local businesses.  She was transported to I.C.J., where she later posted bond and was released